I didn't start making metarooms until relatively recently. That being said, I personally don't find them to be as big a hassle to create as others might think; for me the biggest problem is finding someone to make the graphics.

A big thank-you goes out to Mea of Caos of the Creatures Realm for her assistance with most of the metarooms on this page. I couldn't have made them without you. 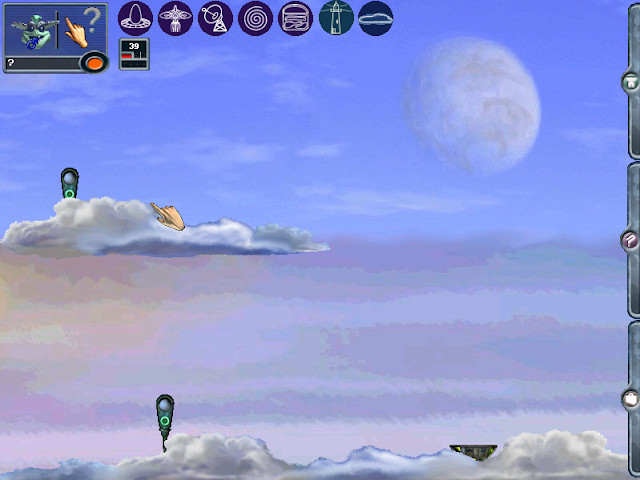 Sky Sanctuary
This was one of my CCSF 2009 releases (the site for which has gone down and can't even be browsed with the Wayback Machine). It was originally intended to be a home for the Skyswimmer Grendels, with birds, plants - everything a good creatures-oriented metaroom should have. This release is actually usable - creatures can navigate it easily, at any rate. Don't expect any further updates for it though; I've since lost interest in working on it.
This agent only injects into Docking Station, although it will work with C3 standalone should you decompile it and change a few things around in the .cos file.
Download 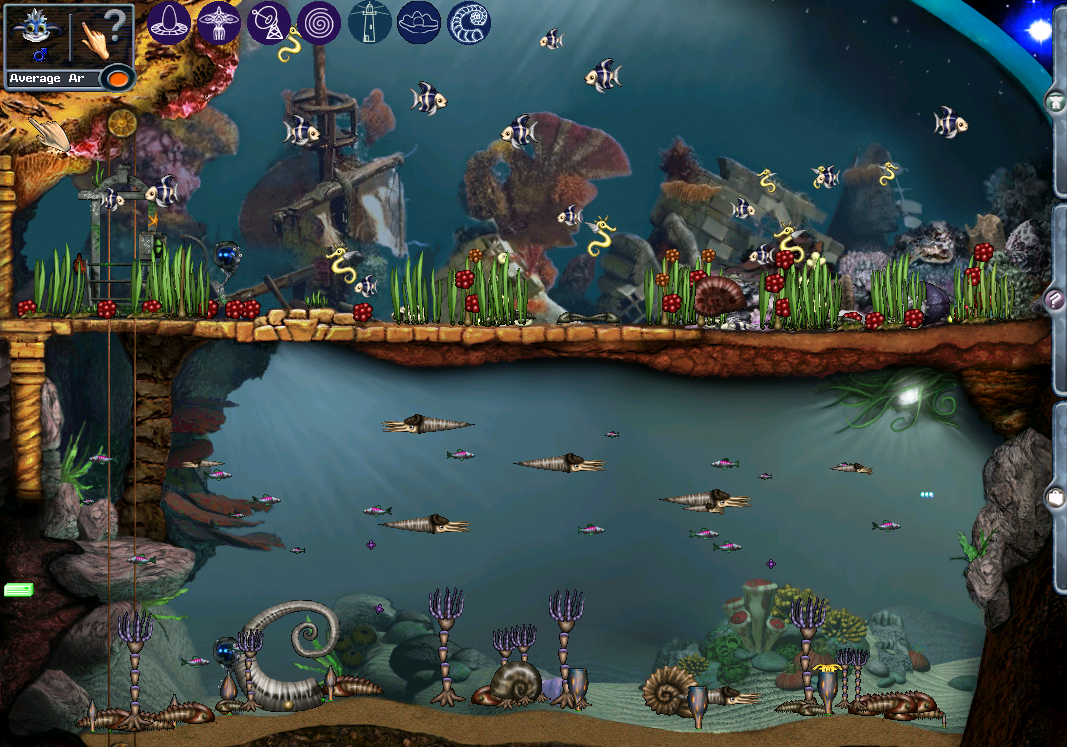 Past Seas
My main release for the CCSF 2011, made in collaboration with Nirax. This two-level aquatic metaroom was first conceived on the Gameware Forums and got surprisingly far before interest there was lost. It didn't have a real chance at becoming reality until sometime before the CCSF 2010, when I managed to get into contact with Nirax again. While it made significant progress at that time, I got lazy right before the CCSF started and didn't get it out in time. I finally kicked my rear end back into gear and got it out for the CCSF 2011. It's had a few updates since then (notably population monitors, immortal organisms that exist solely to repopulate their species should the rest of them die out).
Consider downloading the patch if you're having trouble injecting it (although I haven't heard of anyone who's needed it yet).
Download
Patch Download 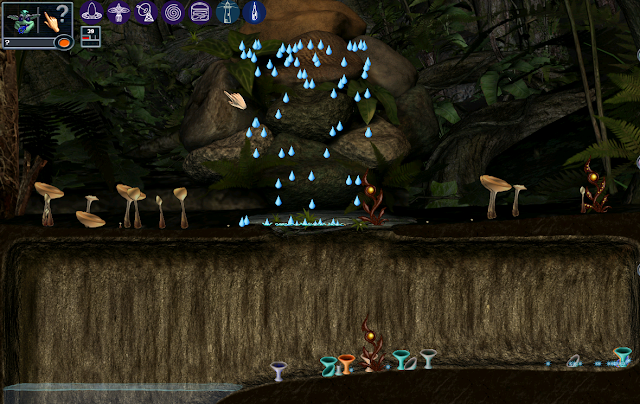 Silence Falls
Silence Falls is only slightly younger than this blog. Not surprising, since it was a post on this blog that got this thing made in the first place. After the relative failure of the Gardenia Falls wolfling run, I said something about restarting the run in a different, larger room. Mea read that post, and offered to make me a custom metaroom - an offer I didn't expect to happen at all.
However, the concept for the metaroom is actually as old as the Waterfall Grendels (who were themselves inspired by the waterfall that sometimes appears in the Canopy). After I finished them, I dreamed up a metaroom where most of the background of the upper level was taken up by a massive waterfall and the lower level was full of fresh water. As you can see, Silence Falls deviated from that concept a bit. However, it still came out beautifully.
It's a great home for the Waterfall Grendels, but your other creatures can enjoy this place as well. It is rather barren in terms of initial agents, though - just two mushroom species (both of which are available through other means). It is meant to be customizable, however.
Download 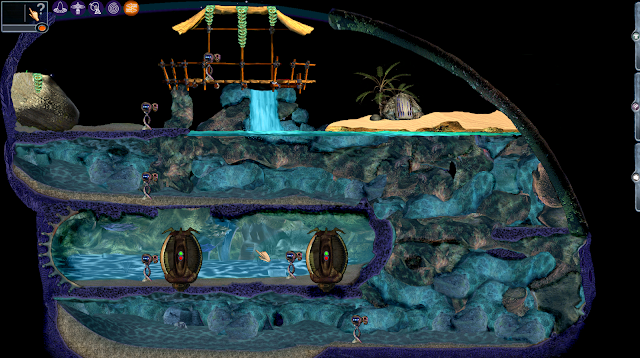 This metaroom was created by Jennie a long time ago over the span of a few weeks. It was a fine little place, but it was rather buggy (especially the DS version). For the CCSF 2012, I decided to take the place and patch it up. While it's now completely devoid of native flora and fauna, that means you can customize the place to your liking.
This metaroom works with all possible game combinations - C3 standalone, DS standalone, and DS docked. How, you will need C3 installed to use it (since it draws some of its resources from that game).
Download 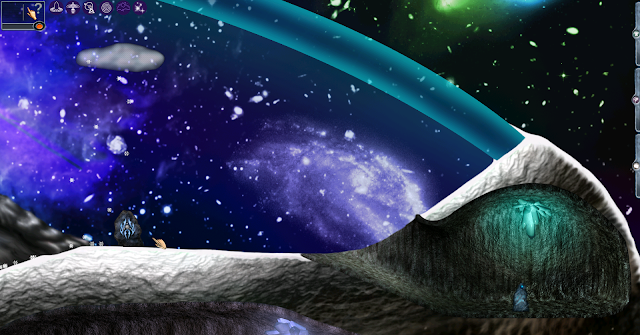 Chione
Chione is a gargantuan icy metaroom that's been years in the making. It was first proposed by Sam999 on Creatures Caves. The topic then picked up interest, notably by Silvak (who helped conceptualize the place) and Mea (who made the background). Once Mea finished the background, Liam mapped the place and added CA. It was then released for the CCSF 2012.
Liam unfortunately had to abandon ship due to reality. As such, I decided to throw my lot in with the project, and eventually turned it into what you see here. The full changelog is in the readme, but the most notable changes from the initial release is that the room has a weather system, teleporters and doors, and no longer conflicts with the Biodome.
Download 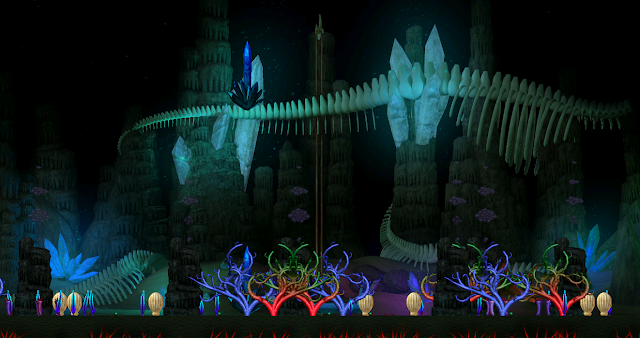 The Deep Abyss is the latest result of my partnership with Mea. Mea came up with the initial idea after participating in Survivor: Arctic. I then suggested that we combine that idea with one of my own ideas (a whalefall metaroom), and we went from there. The intention was to release it for the CCSF 2013, but unfortunately my own laziness/ADHD got in the way and I wasn't able to get the whole thing done in time. I still managed a release, but it was nothing but the basic room.
For the 2013-14 New Year, however, I released an updated version that comes with the plant life, making it a far more suitable home for water-dwelling creatures. The rest will come at a later date, but for now it should be quite a bit more usable. Make sure to read the readme, though.
Download 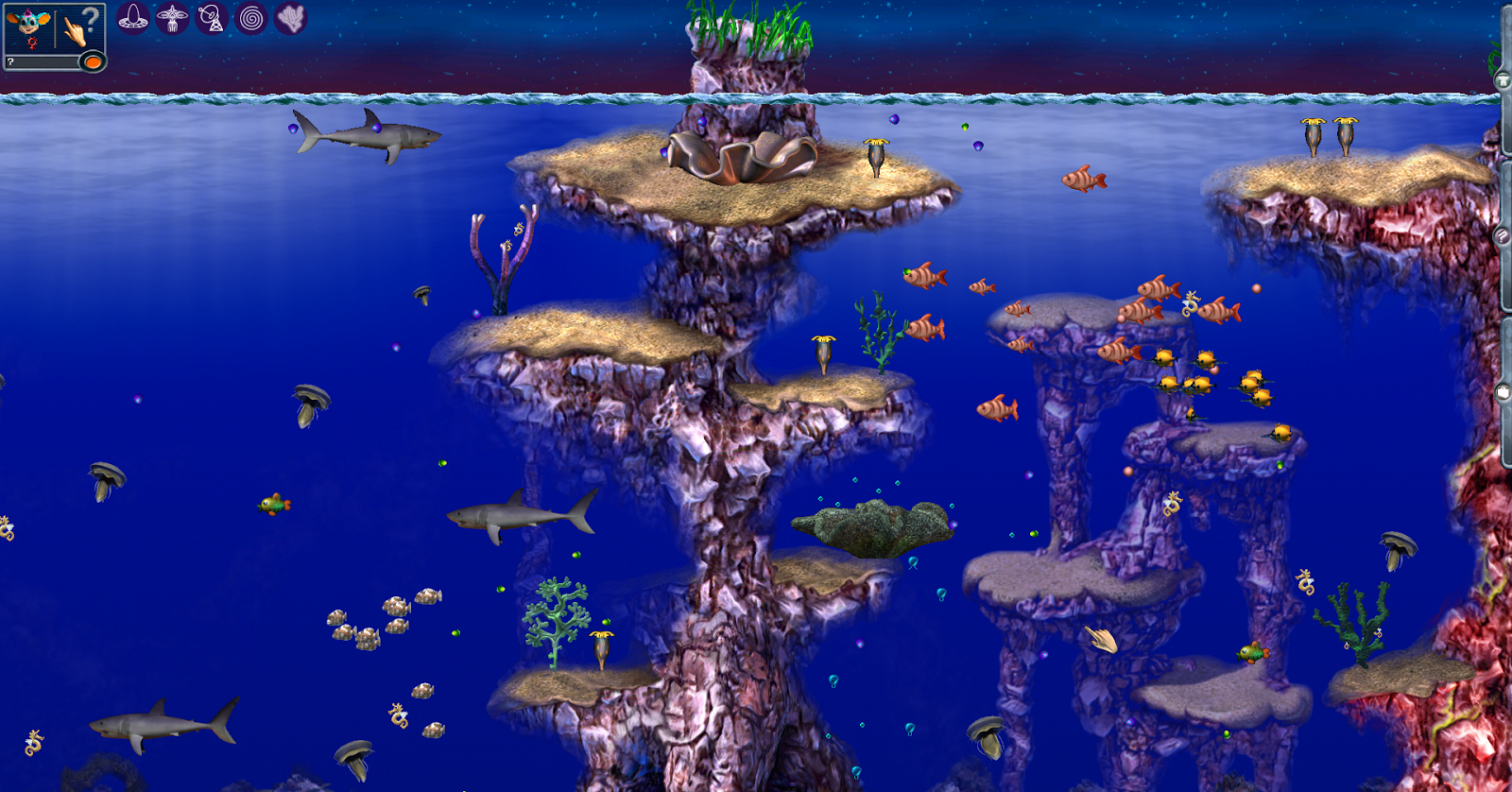 My main release for CCSF 2014, and the sole big release of that festival.
The idea for this metaroom largely came from clohse's Sea Monkey Marina and Nornenmeister's Albian Sea Bay. The Sea Monkey Marina in particular is what gave me the drive to make this metaroom. I was going to try and make a personalized version of the Sea Monkey Marina, but decided I could do better if I just made my own Sea Monkey room instead. It started out as a mostly solo effort, but Mea helped me out towards the end by contributing quite a few sprites. I'm pretty proud of the end result and consider it my best metaroom thus far.
In many ways Artemia Sea is a C3/DS version of the Albian Sea Bay. While it's built upon the tank from the Amazing Virtual Sea Monkeys and has a few critters and plants from that game, it's not intended to be a Sea Monkeys themed room. Instead, it's designed to be a general aquatic area for swimming creatures to call home. Most of its ecology comes from elsewhere, but Mea was nice enough to sprite some completely new flora and fauna for the room.
Download