While I'm waiting for the new computer to arrive, I figured I might as well do another metaroom review. The metaroom featured this time is one of my old favorites: Aquamind, by zareb.

Before I properly begin, here's a bit of backstory on the room. Aquamind was one of the first aquatic metarooms to be made, and I believe it was zareb's first metaroom as well. As such, it's not necessarily the most well-put together metaroom and really shows its age when compared to other, more recent aquatic metarooms (Aquatilis Caverna, for example). 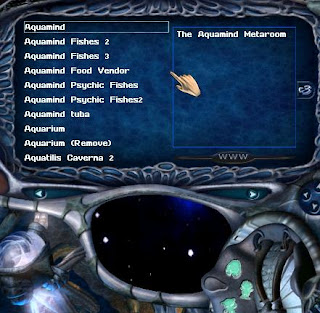 Anyway, when one installs the metaroom and is about to inject it, he/she will notice that it has multiple parts, like the Devil's Reef, C2toDS, and older releases of Aquatilis Caverna. I imagine that this is due to zareb's relative inexperience at the time - the metaroom isn't quite large enough to warrant splitting the agent files. It's also worth noting that one needs to open the CAOs Command Line and expand the map manually before injecting Aquamind - it'll throw an error otherwise since the room doesn't expand the map automatically when it's injected. 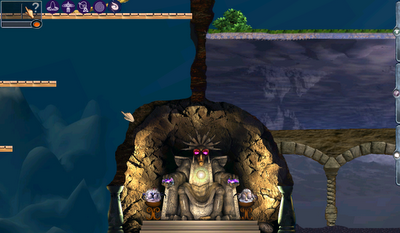 The first agent contains the metaroom itself, and this is the sight that greets the player upon entering the room for the first time. As you can see, its graphics aren't the best, but still relatively well done given the room's age. The room is a combination of C2 and original artwork - the shee statue in the middle is the biggest example of the C2 influence. Given that there's two severed norn heads sitting on the torches next to it, I imagine that zareb was going for an evil feel with it.

That's the metaroom without agents. The metaroom once it's been filled up looks a little different. 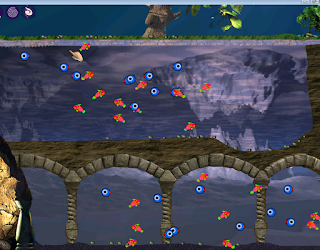 This bit is the freshwater section of Aquamind once all the parts have been injected. As you can see, the freshwater fish make Ostrova look like fine art in comparison - another sign of the room's age. The tubas are also worth noting - besides a different classifier, they're practically identical to the default DS tuba. I'll get to how the heck they're growing underwater in a little while (for the record, the area that doesn't have fish in it is air).
There's a bug with the lower part of the room here - sometimes, a creature who wanders too far to the right will vanish, probably due to the rooms there extending past the right side of the metaroom. 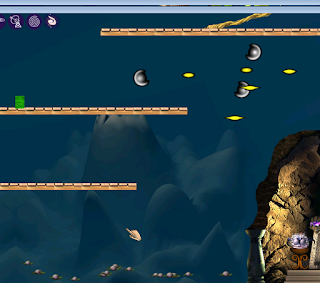 The saltwater area is less intricately designed than the freshwater half, but isn't any less livable. Apart from the aforementioned creature-disappearance bug, the room is very navigable for swimming and nonswimming creatures alike. However, there isn't any way for creatures to get to one section of the room to another without the hand's assistance - there aren't any elevators or doors that link the areas together.
I particularly like the mountains in the background here - they really add to the overall feel of the room, which just so happens to be Aquamind's strongest selling point. More on that in a little bit. 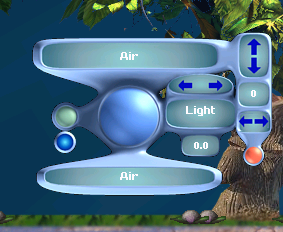 Just as there's a lack of elevators and doors, there is also a lack of CA. However, just like Ostrova, Aquamind has the excuse of being made long before adding CA was one of the requirements for a quality metaroom. The lack of CA also doesn't affect this room as much since there's no elevators or doors.

So, how the heck are those mostly unaltered tubas growing underwater? It's thanks to the odd way in which the room is mapped. While most of the underwater areas are indeed fresh/salt water, the platforms in the saltwater area have a small room inside of them that is classified as "wooden walkway," and the small rooms you see towards the bottom of this picture are classified as soil. It's an odd way of mapping a metaroom, but fortunately it doesn't effect the ability to customize it all that much. It's still possible to take aquatic plants from other metarooms and plant them in here. However, the fish in the metaroom will usually die if they swim through the platforms. Again, the odd mapping choice is probably due to zareb's inexperience.

Yes, that odd rectangular thing that was in a previous shot is a vendor, and the food it gives out looks rather inedible. It can be eaten though. This leads to another one of Aquamind's strong points is that it doesn't need outside food sources to be made fully inhabitable - between the fish, the tubas, and this odd piece of food, creatures have everything they need for nutrition. That said, some toys could probably come in handy since Aquamind doesn't come with any.

Aquamind may be rather dated, but that doesn't necessarily mean it's not worth the hard drive space or the time spent to download it. Actually, I'd say it's quite worth the download. Why? One word: Atmosphere. Aquamind is one of those metarooms that makes the mind get curious and start wandering off, making its own stories about how the metaroom came to be. If there's one thing I like in my metarooms, it's lots of atmosphere, and Aquamind delivers spectacularly in that area. 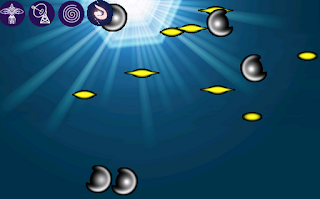 This light close to the top of the metaroom is one of the biggest contributors to the room's atmosphere. Where is it coming from? What could possibly be waiting on the water's surface?
Okay, I'm probably going to sound a little corny from this point on - I apologize for that.

The only part of the metaroom that is air is this bit, but it's no less atmospheric than the rest of the room. In addition to another light, the clouds from C2 are also very nice touches. Between them, the tree, and the bridges, it becomes clear that this area was inhabited at one point - but by who? 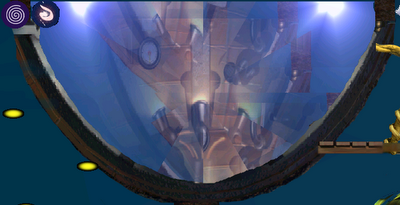 Now we come to what is the most odd thing in the whole metaroom - this odd contraption. Back in my younger days, I always used to call this area the "sphere of time," probably because of the clock in it. This thing is probably the biggest contributor to the atmosphere in the entire room - what the heck was it used for? Is it meant to provide Aquamind's lifeblood? Is it connected to the Shee statue, perhaps?

Long story short: Aquamind has one of the best atmospheres I've ever experienced in a metaroom - and that is about the highest amount of praise I can give out. 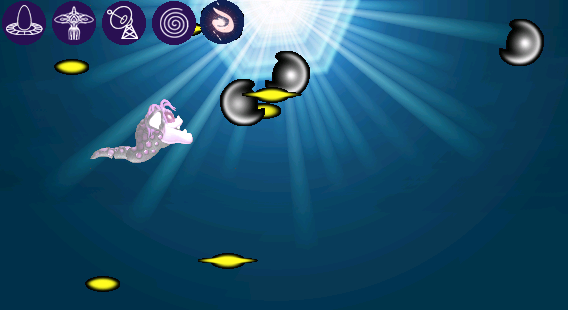 Summary: Aquamind is a great metaroom despite its age. What it lacks in navigability and graphics, it makes up for in atmosphere and habitability. Your creatures will probably get bored without some sort of toy to entertain them, but there's no shortage of food. In the meantime, the room's design and atmosphere is more than enough to keep you busy.
If I had the chance to give any metaroom a revamp, it would be this one. If it had ways creatures could get around the area without the hand's assistance, better graphics, and a more original plant, it could quite possibly be my favorite metaroom.

One final note: Aquamind is one of the few metarooms that I've made a breed for - the Aquamind Ghost Swimmer, a female of which can be seen in the picture above. I've been meaning to update them for a while, but for the time being you can find them at my Norn Adoption Center section (it's linked to on the C3/DS Downloads page here).

Aquamind itself could once be found at Zareb's Creations, but as that site has gone down I've uploaded Aquamind to Mediafire here. I imagine that my views on the metaroom are a bit different from everyone else's (I believe Zareb himself considers Aquamind to be a bit of an old shame), but mileage always varies.