To Elevator or Door: A Matter of Distance

Lately, I finally settled on a setup for Chione that meshed with me. In doing so, I figured out something about CA links that might be something enterprising metaroom developers may want to keep in mind when making a room, as well as anyone who sets up a lot of CA links while setting up a room. 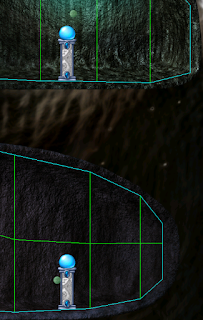 In the Chione Readme, I mentioned a bug with the area pictured to the right. Namely, that despite the presence of an elevator this CA link made creatures want to push a door instead. At first glance, there doesn't seem to be a reasonable explanation. My first guess had something to do with how close this particular link was to the edge of the metaroom.

As it turns out, Chione isn't the only room with a "buggy" link like this. The Biodome has a similar issue with the area pictured to the left.

If you compare the two images, you'll notice something similar about both. Namely:
A. There's an area not enclosed in a room between both areas, and
B. There's a lot of space between the linked areas.

My new theory, therefore, is this: If the area between two rooms is very large and there's an area of non-room space between the two rooms, a CA link between them will make Creatures want to seek out a door instead of an elevator.

So far, it seems to hold water. Let's look at a different area of Chione:

Creatures see these links as "elevator" links; this elevator arrangement therefore works more or less as expected. If you compare this to the other area of Chione pictured above, you'll notice the distance between the links is fairly short. So despite the presence of non-room areas between the linked rooms, Creatures still want to use an elevator here.

This area is from Veridia. While there is a large distance between these two links, creatures will still want to use an elevator here. The most likely reason is that there are no non-room areas between the two connected rooms.

And one last example: here is the elevator area from Past Seas. It looks pretty similar to the earlier Chione area, but creatures see this as an elevator link. Again, it's a matter of distance; the space between the Chione links up above was very large, while the distance here is very small.

I am not entirely certain that CA links actually work this way, but everything I've seen so far seems to support it and I've yet to see a major exception.

To sum all this up:
A. Use doors for linked rooms separated by a long distance and one or more non-room areas.
B. Use elevators for other sorts of linked rooms.

If you're not sure, a good test is to connect the linked rooms with both elevators and doors and watch which means of transportation creatures prefer to use.

To wrap all this up, there's one more thing I should point out: when a CA link linking two areas of the same metaroom makes creatures want to use a door, they'll be looking to reduce their "enter" drive as opposed to their "exit" drive. I actually thought this drive was completely unused up until this point, but apparently not.

Most third-party doors available don't reduce this drive upon use, so you'll often have creatures bouncing back and forth between two rooms connected by doors. Now that I know that the enter drive is, in fact, used, chances are I'll be making an agent that rectifies this sometime in the future.
Posted by Risen Angel at 2:14 PM