Grendels and Waterfalls and Mushrooms - Lots of Mushrooms.

It's time for another release, and this time it's a fairly large one.

I'll start things off with the pack for the Waterfall Grendels V3: 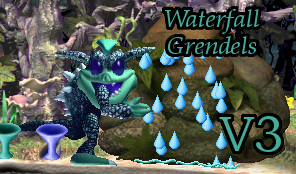 The third version of the Waterfall Grendels is a callback to V1 since I wasn't happy with V2. In addition to all the things about V1, V3 will usually know when it's time to get out of the water and has a more varied diet. In addition, this breed is the first of mine to have the updated digestive process of the Gizmo Norns - to breed, they need to eat.

They come with the Waterfall and Waterfall Mushrooms, both of them updated heavily. The waterfall now has fantastic new sprites courtesy of Mea, and can be picked up and moved to wherever you want it (in addition to actually looking like a waterfall), and the mushrooms come with a dispenser for their seeds in addition to a faster growing cycle.

If you need more mushrooms, there's also the Watercup Mushrooms, whose colorful presence will certainly liven up a dull room as well as providing even more food for your creatures to munch on.

The final release of today is also the largest. Remember that collab that I kept mentioning I was working on with Mea? It was no small agent: 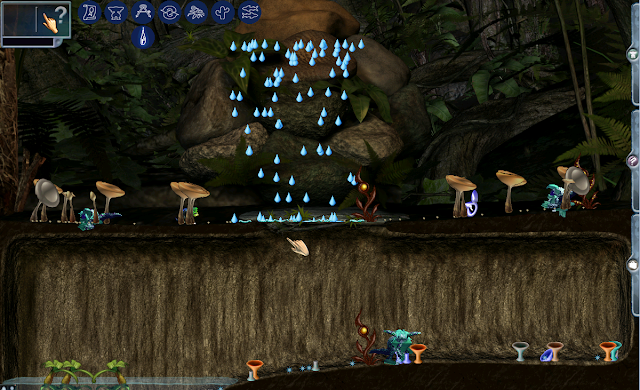 It was a metaroom. This is Silence Falls, the native home of the Waterfall Grendels. The massive waterfall in the center provides the area with its lifeblood. While it comes with both the Waterfall Mushrooms and the Watercup Mushrooms, it is quite open to customization in a similar vein to the Biodome and Veridia.
Mea offered to make a metaroom background for me in response to my posts about Gardenia Falls, and for that I thank her. We both put a lot of work into making this place (Mea even had to get help from her fiance to help render some of the plants), and the result is awesome.

If you run into any bugs, drop them in the comments. I hope you'll enjoy all the new releases!
Posted by D.L. Yomegami at 10:35 PM