I've decided against retiring - as annoying as some people can be, I enjoy being a member of this community, and I enjoy contributing to it. Sure, sometimes I get a little bored, but as far as I'm concerned I'm going to be a part of this community until I die or until there isn't a community to be a part of. On top of that, Creatures is my favorite franchise; sometimes I get a little bored with it, but ultimately I've been playing the games for almost, if not over, ten years and I see no reason to stop now. Yes, there will be hiatuses, but you won't have to worry about my departure.

So what's the best way to celebrate this decision? Well, how about a genetic breed release? This one isn't quite as fancy as some of my more recent works - actually, it's quite a simple breed - but it was a nice way to ease back into development, and the previous version of it sorely needed an update anyway. So, without further ado, I present... 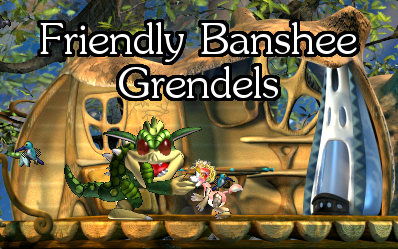 Not a whole lot to these guys: they're exactly what it says on the tin. They're banshee grendels that are (mostly) nice to your norns and aren't angry all the time. They feel at home in the norn home (though they still enjoy the grendel home, mind you), and have the same sort of camaraderie with norns as they do with other grendels. They're great if you like the banshee's appearance, but not their anger issues.

It'll probably be a while before I get back to work on the Sea Garden and the breeds going with it (in fact, I might not get them done in time for the CCSF - I have a backup plan in that case, however). In the mean time, this release should hopefully tide you over for a while.
Posted by D.L. Yomegami at 9:34 PM 2 comments