I noticed there was a bug with the Edible Gadgets agent included with the Metallophagus Grendels - there was a typo that could affect the edibility of some gadgets. I've fixed this - it should be available in the initial release post, but you can also get the new agent file here. Just use the Remover to get rid of the old version and then inject this version to update your world.

I've also made a version the agent that works with Geats - specifically Gaius - and is therefore tailored to the stims they use. It was made by request of Ghosthande. Download this agent here, but do note that I haven't tested it very thoroughly - just enough to know that Gaius can use it effectively.

I'm liking this world so far. Despite the lack of variety, all the carrots and Gaius plants really make the world look lively, and that's before the grendels started hatching. I didn't take any pictures of the hatching, unfortunately. However, it wasn't anything too exciting (the grendels either fell off the ledge near their hatching area or used the elevator). Afterwards, they spread out over the room. While there was some aggression in the beginning, I warded them off that path and shortly afterwards injected Clucky's Stop Slapping Creatures agent, ensuring that psychopathy would never be seen in this run.

Another thing to note is that documentation of this run is mostly going to take the form of picture dumps - the grendels rarely do anything interesting enough to warrant special notice.

These two grendels were the only ones to stick close to their hatching area. So far, they haven't been doing anything except nom on carrots (although they're always smiling when I check on them; I assume they grab some gadgets when I'm not looking). The male is indeed shivering; Metallophagus Grendels tend to shiver a lot despite being resistant to cold. I assume it's because the techno-organic carrot doesn't give them much incentive to move.

The rest of the initial eight grendels scampered over to Engineering. These two females decided to stick around in the corridor for a while. No reason to rush when food is nearly everywhere, anyway. I also was skilled enough to snap this picture right as a carrot was being pulled out of the ground. As you can see, it hasn't changed to its "Pulled out of ground" frame yet. This isn't a bug; it just takes a few moments for the pose to change. Also, the tumbleslink seems to have spread out from its initial home of Engineering - it's another case of "plant teleportation," a bug that affects a lot of third-party plants (including my own). I think the only way to fix it is to make the seeds have the same bounding box size as the plant, which doesn't work for the tumbleslink thanks to the way it's coded. 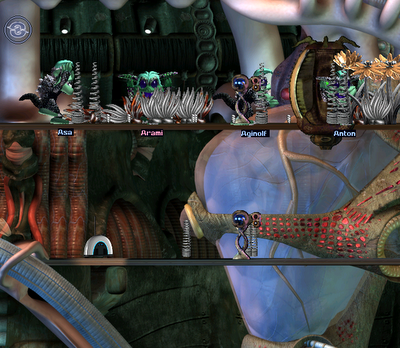 Okay, back to the grendels. Metallophagus Grendels also seem to crowd easily, hence why they seem to be retreating from each other here.

There's another thing worth noting about this picture. I'm not certain how many minds this is going to blow (if any), but I certainly didn't notice that the blue thing that occupies most of this picture was in fact a lung - a real, organic lung. I didn't even notice that was there until I first started testing out the standalone Bridge/Engineering agent that's being used in this run. I always assumed the lung was the green, animated thing that looked like a bellows. Turns out, that's just part of it. 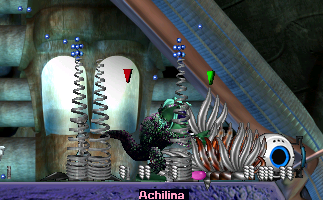 Sometime after the previous pictures were taken, this female migrated down to the lower floors of Engineering for some reason I cannot fathom. Maybe she got overcrowded or something.

Metallophagus Grendels can eat machinery, but since most agents classified as that cannot be picked up, most of them dismiss machines and just eat the more portable gadgets. As such, the intelligence core is mostly safe from becoming somebody's lunch. 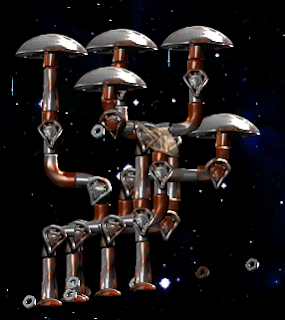 Here's a really egregious example of the teleporting plant bug: Spigot Plants, in SPACE! The nut that got this group started probably originated in the gene splicer area. Normally, the airlock agent would blown it up before a colony could get established, but apparently space didn't feel like being realistic today.

Funny thing is, sometimes it does cooperate and disintegrate something, but it's never the plants themselves - I think it's usually a water droplet or a nut. Since I really can't be bothered to remove these, I'm just going to leave them there until they die out on their own. 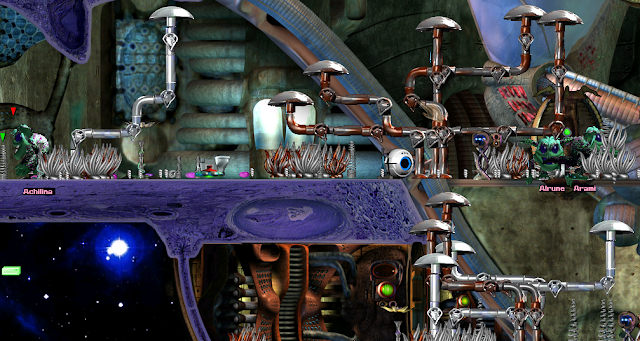 Apparently, whatever drew the first female down there was attractive enough to make the other females in Engineering follow her. The spigot plants have really gotten nuts, much to the detriment of the local Tumbleslink population (according to their code, their seeds won't sprout in the presence of Spigot Plants). Not sure what the grendels think of it, though. They're probably more interested in the carrots. 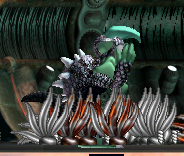 It was around this time that the older grendels started hitting breeding age. This male is the second oldest one on the ship at this point (the eldest is one of the two at the bridge). I also seem to have an uncanny ability to snap pictures at the wrong times (this is the second time this post that featured a grendel shivering with his eyes closed). 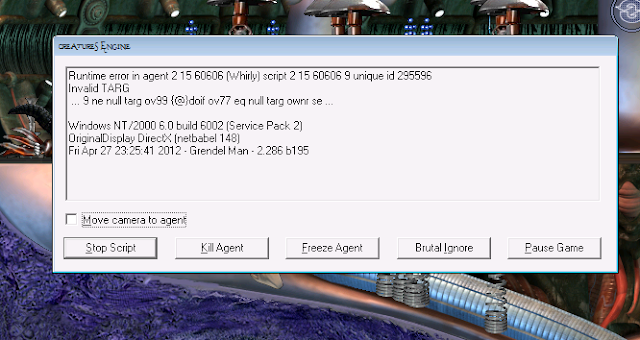 Note to self: Write a 255 (exception) script for the Whirlies. This error message has popped up so many times now it's not even funny. Speaking of the Whirlies, I found out that they're actually edible despite appearances - not that the meal benefited the unfortunate grendel who sampled one. Metallophagus Grendels can't digest critter meat (or other organic matter such as seeds) all that well.

To wrap up the post, here's a final roll call:
The total amount of grendels currently in the world is eight, forming the initial population of Gen 1s. Speaking of population, I hope those females in Engineering return to the upper levels on their own - down there, they won't be contributing much to the gene pool. However, if they stay down there much longer I'm probably going to forcibly reintroduce them to the males on the upper floors.