After reading the responses to the previous post, I've decided that the name is staying the same for now. However, I do plan on changing it in the future once I can come up with something that can't be interpreted...in an unexpected way. Anyway, moving on.

I've been considering doing metaroom reviews for a while now, but held off on it for some reason (I don't think my initial review of the Lost Cave managed to hit all the points I wanted to make - it was never published). However, this blog shall be a decent testing ground for this potential new series.

My first published review will be of one of the few third-party metarooms one has to pay for - Ostrova, by Chaos Development. So let's get down to business. 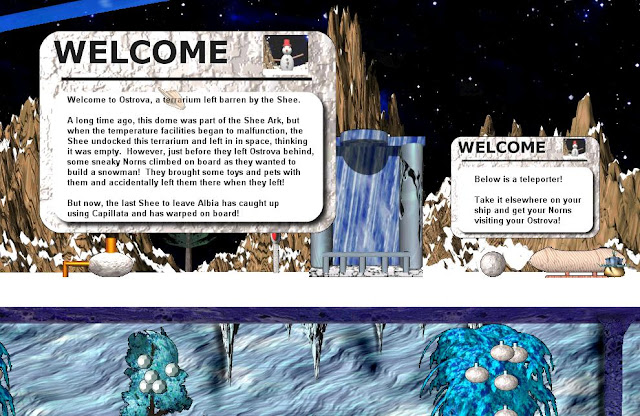 Upon injecting Ostrova, you're greeted with this. Having an introduction screen is always a nice touch, and it's also nice that there are several help screens to let players know what's what (although I do admit I missed the snowball teleporters completely when I initially injected the room despite the big honking sign). 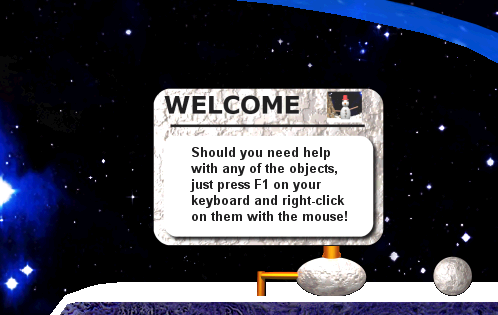 Yet another help screen. Clicking on these gets rid of them, since most players are unlikely to want them sticking around long after their purposes have been served.
From this picture, you can already see one of my gripes about the area: it's quite barren initially, and since the entire metaroom is mostly Air + Indoor Corridor, there's not much you can do to customize it outside of stuff like the Gaius plants (which won't benefit most creatures anyway).

Graphically...well, I wouldn't call this metaroom a work of art. The background itself is rather well done apart from the completely white floor of the upper level - in particular, the parts taken from C3 (the stars and some of the walls) blend in with the original graphics quite well. However, most of the original graphics haven't aged well. Look at this picture, and then look at the Biodome or Devil's Reef, then look back at this picture. Compared to some recent metarooms, the images here look like they were made by someone who was an utter newbie at modeling.

Some of the agents do look nice, though. The penguin and trees are the standouts in this picture.

Ostrova's layout is one of its strong points. It's quite easy for creatures to get around, and there's no places where they could get stuck.
This pond has nothing in it initially besides a rather large egg, but that's easily fixed. The egg is part of a puzzle, in case you're wondering - yet another one of Ostrova's strong points.

As I mentioned earlier, Ostrova is really barren initially. The developers, however, decided that more lifeforms could be added to the room via these tubes. This tube creates 3 caterpillars that will (or rather, could - I've never seen them complete their lifecycle) become butterflies. Unfortunately, there's only three of these tubes, and they really don't do much to add to the room. 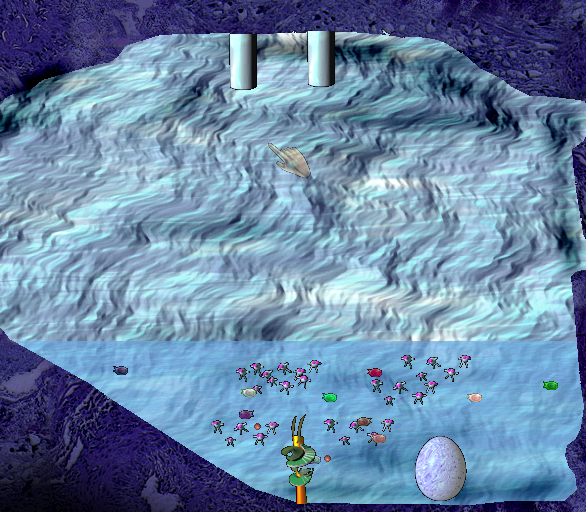 This is what the pond looks like when both of the tubes above it have been activated - you've got fish, bugs, and a plant. The rightmost tube needs to be activated multiple times before the sponge can take root - and even once it gets planted it rarely lasts long.
There's another problem with this room, and that is a lot of its coding isn't original. Everything in this picture is based on a C3 critter (the fish are based on clownfish, the bugs are based on aquamites, and the sponge...is based on a sponge), and besides having different images they're completely identical to their official counterparts, right down to the sponge spores and bugs not being edible and everything requiring salt water to live in (although this pond is salt water, so that latter point isn't much of an issue).

Allow me to reiterate one of my complaints from before - Ostrova is incredibly barren, especially the upper level. These fruits are the only thing that don't require a vendor to be obtained on the upper level - actually, everything that grows naturally is classified as a fruit. It's not a particularly good metaroom for your creatures if you don't plan on interacting with them much. 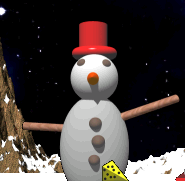 The only other source of food on the upper level is the snowman, who will occasionally spit out a hunk of cheese when pushed. It usually vends toys, though - although that does mean your creatures won't be that bored.
Also, I forgot to mention that the DS version gets a mini empathic vendor injected into it at the start. Another testament to how little this room has in the way of food items.

The lower level is probably the best place for most creatures in terms of food. The stocking vends both lemons and carrots in addition to the cheese from the snowman, and there's a soup vendor. The reddish fruits are classified as manky and are quite alcoholic. This is probably one of the better designed areas in Ostrova, in my opinion. Also, that radio plays some cool (no pun intended) tunes when clicked on.

While this little issue can be forgiven given how long Ostrova's been around, there's no CA emitters to be found in here, and the levels are not linked. This means that creatures in Ostrova won't use the elevators intentionally and will often find themselves huddled in the corners. Some of the agents do emit CA - albeit the wrong ones (the snowballs from the launchers emit starch smell for some reason). 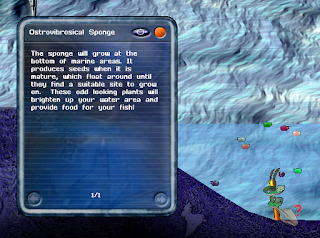 While this more a nitpick than anything else, the developers weren't very creative with their naming scheme. In fact, a lot of the names range from odd to stupid. The sponge is in the odd category - can you even pronounce that? I know I can't.

Ostrova does come with its own grendel breed, the Yeren Grendels. Design-wise, they're actually pretty neat. However, like a lot of other things in this room, they reek of laziness. They have sprites for the childhood and adolescent stages, but the adult and old lifestages are just copy-pasted from the adolescent lifestage. It doesn't help that they have body data issues upon becoming adult (although I'm planning on fixing this). They also don't have a unique genome to back them up - they just use the Banshee genome with a different appearance.

In short: Ostrova is a decent - but not great - metaroom. It has a good layout, some original concepts, and is mostly instinct friendly. Creatures can survive and thrive in here, but they'll need support from the hand in order to do so. However, it's bogged down by only decent to mediocre graphics, lack of CA, and lack of overall originality in coding. Some things about the room and its corresponding breed just look like laziness and/or a desire to just get the thing done.

One final note: Like I stated earlier, Ostrova isn't free. You have to buy it from Chaos Development's current website. It's not cheap, either - it costs $12.50 in U.S. money. For comparison, you can buy Creatures Exodus from GOG.com for less than half of that. As you can probably guess from the score I gave it, I don't think it's worth that much - if it's worth anything at all. I really think Chaos Development really needs to look at the current state of the CC, since that price tag suggests they aren't aware that we're still around.

And so concludes my first metaroom review. I'd like feedback on how well I did - do you guys think it's fair, or do you disagree?
Posted by D.L. Yomegami at 1:08 PM 8 comments