The Realm now has 100 posts. Only took me over two years to do it. No matter how long it took, I do think it's something worth celebrating. And I have just the things.

Remember that wolfling run I mentioned last post? Well, I had a bit of an ulterior motive for running it beyond just my amusement.... 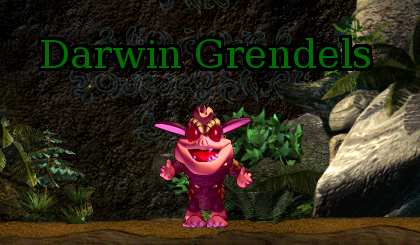 Meet the Darwin Grendels, named after the famed Charles Darwin and created from the results of the wolfling run. They are very robust and can live in all sorts of environments short of a toxic world or underwater. They also breed very quickly, making them ideal if you want to just watch a population in action.
At long last I feel I've satisfied my desire to make my own GoM-like breed, and I have to say I'm pretty happy with the final result.
Download the Darwin Grendels!

That's not all I have, however. The Darwin Grendels had to have come from somewhere.... 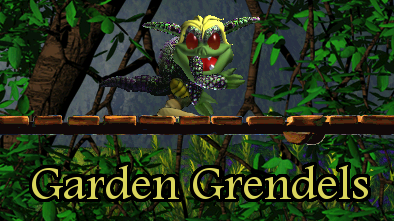 The Garden Grendels are the forerunners of the Darwin Grendels. Their genome (or genomes, rather) were taken straight from the Grendel Garden and composed into an egg agent, and they're offered alongside six grendels from the population at the end of the wolfling run. They aren't as refined as the Darwin Grendels are, but they should prove to be just as capable as their descendants.
Download the Garden Grendels!

And that's still not everything. This last release is only tangentially related to the Darwin and Garden Grendels, although it was tested and eventually became part of the wolfling run.

The result of my latest collaboration with Mea, this acorn patch plant will add a much-needed seed to the Garden Box. The acorns themselves are fairly unremarkable, though your creatures will likely find them delicious.
Download the Garden Box Acorns!

Phew, that was a fair few releases. Actually, there would have been even more had I not burned myself out towards the end (though chances are the stuff I had planned will be created and released at a later date).

At any rate, I hope you enjoy the new releases! Until the next one, folks.
Posted by D.L. Yomegami at 9:34 PM Leave a comment

Recently I managed to set up a wolfling run world, in order to start up a new project. I could just post a picture and a description, but that'd be a bit boring. So instead, have a video:


It's a wolfling run world (well, technically a feral run, but I don't interfere all that often) set in Veridia. I wasn't aiming for anything in particular with the room setup, other than maybe encouraging the grendels to move around more.

Most of the food sources come from the Garden Box. There's four permanent patches; three large patches on Veridia's lower level (apples on the right, explodonuts on the left, and carrots in the middle), and a small patch of mushrooms growing up in the egg hatching area. There's also a number of seasonal patches. In addition to the Garden Box, there's also a few potted plants and vendors scattered around, mostly in the upper level. There are no non-permanent food sources.

The participants are grendels, based on the ChiChi Norn genome. Every ten generations or so, I export a sixth of the population (six males or six females, depending on which gender has the majority at the time) and replace them with fresh firstgens that have additional genes I'd like to add to the main population.

At first, the population only had some edits to make them more grendel-like, but currently I can say that they breed rather quickly and have the same aging rate and lifespan as a banshee grendel. At the time this video was recorded I was trying to breed in resistance to crowding, but so far I'm not certain how that's working out.

Their appearance is a mixture of standard C3 Grendel, Banshee Grendel, and Mask Grendel sprites. I did try introducing Zwergbunt Grendel sprites, but they didn't seem to have stuck.

The max population is 24, and an Ovicidal Machine keeps the amount of eggs around that limit as well. I plan on continuing the run until generation 100.

Since recording a video like this really isn't a problem for me, I'm thinking there'll be more videos like this eventually. However, most of them won't be as long as this one. If anyone has any suggestions, I'd like to hear them.

On a completely unrelated note to all of this, I'm almost to 100 posts on this blog (took me long enough). I may or may not have something special planned for the 100th post....

Until the next one, folks.

P.S.: The music in the video is Agniratha, Imperial Capital, from Xenoblade Chronicles. It's a great game with a great soundtrack; if you have a Wii and come across a spare copy, I highly recommend picking it up.
Posted by D.L. Yomegami at 4:23 PM Leave a comment

So today I had a hunch to make something, and so I did. It's nothing really spectacular, but it seems like a good first release of the year.

This is a conversion of Steve Dismuke's Medicinal Compound for C3/DS. It is most efficacious in every case, whether it be helping a sick creature get better, or for healthy creatures looking for a quick way to get smashed. Might not want to let that latter category overindulge themselves.

All credit for the original Medicinal Compound goes to Steve Dismukes. It was one of my favorite C1 COBs, and I hope he doesn't mind the fact that I've converted it over to C3/DS.