...Because they risk getting nommed otherwise.

These are the second version of my Metallophagus Grendels, ready to roam your ships and eat your gadgets and machinery - this time literally. With the included agent, they can actually eat any gadget that they can pick up - that includes things like the Anti-Bacterial Spray, so you might want to lock up your important gadgets before setting a group of these guys loose.

In addition to actually eating gadgets, V2 also ages slower and is more heavily benefited from Heavy Metals (they can even use it as an emergency food store). While they're generally inoffensive, don't let your norns harass them. If attacked, they will retaliate quickly and painfully.

In addition to the agent that lets them eat gadgets, the Metallophagus Grendels V2 bring along a special food item with sprites helpfully donated by Mea. 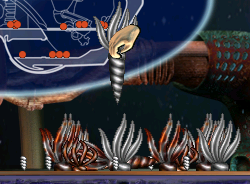 The techno-organic carrot, a strange blend of plant and machine, grows in inorganic areas. It provides all the nutrition your Metallophagus Grendels need, so expect to see them wherever a patch of techno-organic carrots is found. Normal creatures can also eat the carrot, but I wouldn't let those eat the rusty or rotten carrots....

To wrap things up, I'm also uploading V1 of the Metallophagus Grendels since originally they were uploaded on Mediafire. I released these over a year ago (I thought these were a recent breed - hey, time flies).

V1 is similar to V2, but obviously less refined. Unlike V2, V1 doesn't need a special agent to feed - they can just hit the gadget to obtain nutrition. They're also generally peaceful all around.

You might have noticed that the pictures look a bit different. With some help from Firebug, I replicated the image style from Naturing :: Nurturing and Jessi's Creatures Documentations. I think the photograph-like style fits, but of course your mileage may vary.
Posted by D.L. Yomegami at 8:22 PM 1 comment