Happy Valentine's Day to all of you! Granted, as of the time of this writing, the day is almost over, and I imagine it's probably already over for some of you. Even so, I hope you all got some quality time with your significant other (or at least some candy if you're single like I am).

Unfortunately, I can't give you candy over the internet, so this new release is going to have to do. 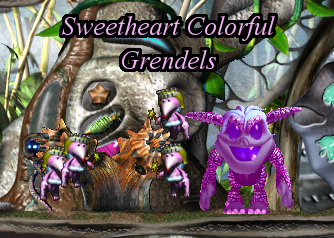 The Sweetheart Colorful Grendels are the first of the Colorful Grendel sub-breeds. Coming in an array of bright, hopefully lovely colors, they're best known for their love of pushing other creatures. In fact, they're so friendly that they can feed by interacting with their fellows! Just keep them away from Hardman Norns; they take the phrase "Make love, not war" to a decidedly ridiculous extreme.

After that little rant in my last post and some Googling, I figured that doing some CAOs might very well help me with the issues I've been having. To begin, I decided to code something quick and easy to help me ease back into it and Creatures in general. Converting an agent to the Garden Box would be a good place to start. And so....

I think I'm going to focus mainly on Garden Box agents for the next couple releases, and keep things reasonably simple as I work my way back to being able to focus on more complex agents and breeds. Until the next one, folks.
Posted by D.L. Yomegami at 4:06 PM Leave a comment

On a Lack of Interest

So I've been thinking about why I haven't been playing Creatures lately and why I haven't had much of an urge to do any developing. I guess part of it is that the community has been rather inactive as of late (although granted, it seems like everyone is horribly busy and/or sick right now, not just the Creatures community), although that's definitely not all of it as I'm finding Creatchi to be more enjoyable than the actual game right now.

I've come to the conclusion that the biggest problem is the way I tend to play the game.

I'm not the sort of person who can just inject a few metarooms, some agents, and then hatch some creatures and get to playing with no issues. No, I have to gut every single metaroom to remove any creature-unfriendly agents or navigation and replace them with fitting creature-friendly substitutes. This sounds simple on paper, but more often than not every world I attempt to create turns into a coding project.

Creating a new agent/metaroom every once in a while? That's fine. I can do that. Having to code every single time I want to start a new world? Not so much.

Even if I manage to make it past the initial setup, I have to contend with my finicky taste in agents. I generally prefer natural-looking agents, or at least agents that don't look "goofy." However, my brain is extremely particular in what it considers not to be "goofy." Furthermore, even if an agent manages to look good, it also has to be creature-friendly AND fit the metaroom I want to put it in. The end result? There's somewhere in the range of twelve agents I can use without my brain throwing a fit. I can generally fill up a small room (like the Grendel Hideout) without issue, but small rooms aren't good for large creature populations - besides the fact that everyone's likely to get crowded and start beating each other up, a lot of creatures tends to be a major strain on the room's resources.

So there's not a whole lot of metarooms I can use, either. Notably, the list of metarooms I can't use effectively include the C3 Jungle Terrarium, C2toDS, and Chione (the latter of which is particularly bad, considering I helped make that one). All of this also probably helps explain why I don't find Veridia to be as enjoyable as everyone else seems to think it is.

Setting up a world should not be this hard, and yet it is. Beyond the fact that I'm probably ADHD, I have no suitable explanation as to why I have to do it this way. All I know is that it blows and I wish I could be more flexible.
Posted by D.L. Yomegami at 12:41 AM 2 comments