I'm Being Followed by a Moon Shadow....

Today, the 22nd of July, is my birthday. I've finally hit 20, which means I can join the old people's club and wave my cane at young 'ems yelling "GIT OFFA MAH LAWN!" However, that is of minimal importance to this blog, or to the community in general.

I first started playing Creatures a long time ago - I forget just how long, but it was before I had access to the internet, and most likely 10 years ago. I'm amazed I've managed to stick with the series this long, but I don't regret a thing.

So I've decided to celebrate, but that doesn't mean I should be the only one having fun. I bet a release would definitely lift some spirits up, and I've got just the thing: a breed that's most definitely my finest work in genetics up until this point. 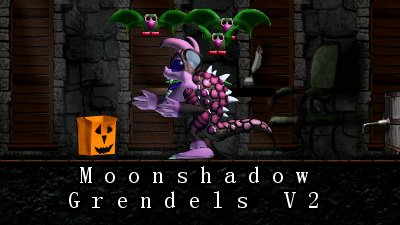 Those of you who frequent CCaves might have noticed that I was working on something and that something would get released Sunday. The Moonshadow Grendels V2 - an updated version of a breed I made way back on Gameware - were that something.
These grendels hunt norns, but are dirty cowards who run away when slapped and are more frail than the standard norn. What makes them so dangerous, then? They have an agent that comes with them, and this agent allows them to become invisible - enabling them to attack norns with impunity.
A lot of work went into them (it actually took me days to finish them - only the Flesheaters are taking longer), but it was worth it. I was finally able to put all the things I learned about genetics to work.

Don't have the Banshee Pack? Don't despair - the Moonshadow Grendels V2 come in normal Grendel form, too. If you have C3, you're good to go.


The Moonshadow Grendels were also the reason for the lack of Tevaela updates - they distracted me and at the moment I'm rather disinterested in continuing it (though I did play it a little - nothing much of interest happened, unfortunately). I'll get back to it at some point.
Posted by D.L. Yomegami at 1:12 AM 3 comments