First off, an update about the blog: The name change has finally paid off. No more bad sites are contributing to the traffic here (although not all the current traffic sources are Creatures-related...the new non-Creatures source seems to be inoffensive, though). Also, I've changed the background again (the old one looked weird on my new computer, since its resolution is crazy high compared to my old one), and am now completely happy with the blog's design. I wouldn't expect any major design overhauls in the near future.

Now, for the main point of the post: I've actually finished a release! Unlike the grand majority of my past releases, though, this one is for Creatures 2: 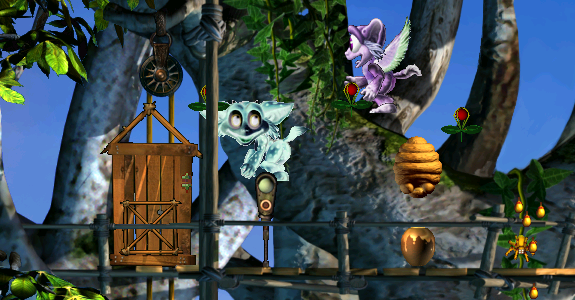 This COB will allow creatures of all ages to fly, provided they have a sufficient concentration of chemical 218 (which is also used by the Angel Norn COB - don't use both in the same world, lest you have issues). On the surface, it's not much different from past flying COBs. However, this one brings along some extra scripts that give flying creatures control of their vertical velocity - no more grounded fliers!

This is the first C2 COB I've made and released - not exactly the most typical of first COBs, but I'm very proud of it. I plan on making a Swimming COB that makes use of the extra scripts to allow swimming creatures to control their vertical velocity as well - my first attempt didn't go over so well, though.

As for other projects...well, I've been having trouble focusing. I've been having major trouble trying to stay focused on one project without getting bored/frustrated and moving on to another. The lack of focus is the main reason for lack of activity right now since the other reasons for the hiatus are now a non-issue. Hopefully, I can get to work on some of my older projects (*coughseagardencough*) sometime soon.
Posted by D.L. Yomegami at 12:37 AM 1 comment