Okay, not "posthumous" per se. I haven't deleted Tevaela if that was what you were thinking - it's merely sleeping. Last time I popped in, the norns hadn't moved from that garden and didn't move from it during the entire time. Since I doubt you want to read much about norns who don't wander, I got disinterested and started up something else, which I'll cover in a later post. In the mean time, here's what happened the last time I opened the world:

Warpish finally displayed a sign of her weirdness by aging to youth much faster than normal. Awash with hormones, she proceeded to annoy the crap out of the other norns (who still have a ways to go before breeding age). Matoko also decided to take up being slappy as a hobby. I'm trying to get her to knock it off, but she's always behind another norn when she starts up and stops before I can get to her. Okay, that has nothing to do with this picture, but I didn't manage to catch her in the act to take a picture. 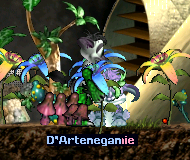 Yes, this looks like D'Artenegan is being a gentleman and bringing Queenie a flower. In actuality, he grabbed the flower before Queenie showed up. Then Queenie starting beating the heck out of him, apparently trying to tell him to pick up a more manly hobby than gardening in her own special way. D'Artenegan, being the robust norn he is, didn't have much of a reaction. Maybe he was trying to offer Queenie the flower. Okay, I'm rambling. Moving on. 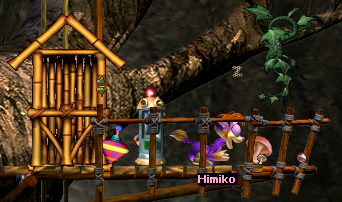 Himiko decided that she needed some solitude, and became the first norn in a while to use the elevator. She didn't go far, unfortunately - after this picture, she went back down and joined the others again.

Just a group shot I decided to take. Queenie, Himiko, Bonita, and D'Artenegan appreciate their moment of silence (though Bonita's a bit crowded), while Warpish continues to be a pest and fail to understand that 1. the others aren't old enough to breed yet, and 2. she's trying to kisspop another girl.

And another group shot to end the post, taken some time after the previous. It seems everyone except D'Artenegan and Queenie decided to pair up, and Warpish finally stops attempting to breed in order to get a bite to eat.

Lot shorter than the previous Tevaela update, huh? Like I said in my previous post, I'm not sure if I'll pick up the world again any time soon. I'm finding other things to be more interesting at the moment (both Creatures-related and not).