For a first non-introductory post, I decided that I'd showcase my current development/general gameplay world, which has the exactly same name as this blog. While it might not be that interesting to some of you, others might like to know what I do differently as a Creatures player.

Before I say anything else, this post is very image-heavy with some very big images. I apologize to anyone with a slow connection.

I'll begin my world description by showing off my current Favorite Places list. Besides the default metarooms (as you can see, this is an undocked DS world), I also added the Hub by Annex (with some alterations - I'll get to those), the C3-in-DS Norn, Jungle, Ettin, and Aquatic Terrariums by Emmental, and C1toDS by a heck of a lot of people. I'm planning on adding more at some point, but as I can't think of any metarooms worth adding that aren't big empty expanses this line-up will do for now. 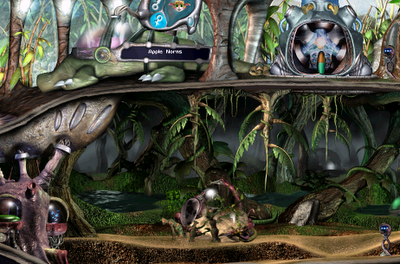 Speaking of big, empty expanses, here's a glimpse at my Norn Meso. There's nothing in here due to the fact that, since I like to run a lot of single-room wolfling runs and most of those runs are not in here, I removed most of the .cos files that would otherwise inject agents into here (such as the food vendors, the stinger pod, and the tuba). The only Meso-exclusive agents in this room are Muco, the Commedia, and the HLM. As this emptiness is typical of the rest of the default DS area, I won't spend much time on it.

Now for Annex's Hub. If there's anywhere that has a lot of altered code, it's this place. Let me list all the things that were changed:
Besides the above alterations, I've also added Aquashee's Botanoid and Ghosthande's Chyme Plants (from her Gaius pack) to prevent Eat Elevator Syndrome. As you can see, it's actually quite a popular hangout even for naturally-inclined Apple Norns.

Now for the C3-in-DS metarooms. Since I've injected all four of the main C3 areas, I took it upon myself to re-add the doors linking them (that is, the ettin accessways and the norn-to-grendel door), and I've also applied Vampess's fixes to the lifts (note to self: Add Creatures Heaven to the links section). 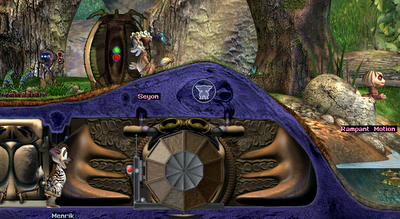 The Norn Terrarium has Vampess's fixes to the wildlife applied to it and had the heat turned up to keep the carrots around, but apart from that it's pretty much the same room as it was in C3.
I'd also like to note the creatures in the picture. The two norns, Menrik and Seyon, were adopted from Discover Albia's CreatureLink, and had their starts in the scenario world detailed there. Unfortunately, neither of them has bred yet (I doubt Seyon's going to breed before she dies from old age. There's still hope for Menrik though, as he went to join the Apple Norns in the Hub shortly after this picture was taken). The fittingly-named Rampant Motion also seemed to be suffering from EES in this picture - I'll snap her out of it once I get back to playing. 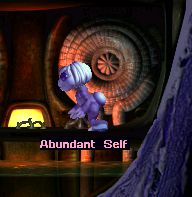 Abundant Self, along with Rampant Motion, came from the Ettin Egg Layer. I'm not quite sure what genome she's using - she's definitely not a normal ettin, I can say that much. I originally thought she was a Lungfish Ettin, but she has normal sleeping patterns (Lungfish Ettins fall asleep constantly if they're above water).
Another random quirk about the world: The grendel and ettin egg layers typically produce grendels and ettins instead of other species with genomes beginning with "G" or "E," as the default layers do.

The Ettin Terrarium underground is decorated with Gaius's Spigot Plants and Chyme Plants. The geat himself is nowhere to be seen, though.

Okay, there's not a lot to say about this area. I just snapped this picture to show off the flora. Since there's nothing of major note about the Aquatic Terrarium, I'm moving on to C1toDS. 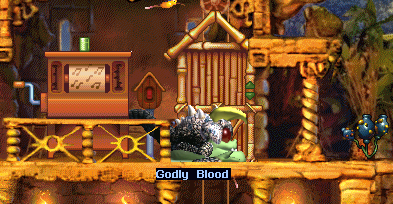 Godly Blood (interesting name) is a default C3 grendel from the egg layer. The only thing worth nothing about him is that he has learned to play with toys and eat birds. He didn't come here on his own - I dropped him onto the island after he attempted to attack Seyon (he didn't actually manage to hit her).

To wrap things up, I'll describe what I did to the Western Ocean. To accommodate Melted Example and Handsome Baby (a Hydrolisk and a Banshee Hydrolisk, respectively), I added the sponges and gumin grass from the aquatic terrarium (who have edible seeds thanks to my meddling), as well as the Kyutai whales, recoded so that creatures call them norns. They're pretty much there as punching bags for the grendels. Melted Example is the grendel who posed for the blog's current banner, by the way.

This'll probably be the last expository post. My next post is definitely going to be about something development-related.
Posted by D.L. Yomegami at 1:34 PM 5 comments