So I started the Wolfling Run shortly after making my last post. The tribbles being able to breed like rabbits? Didn't help them much - they were extinct in literally less than a minute (read: when only three grendels had hatched). The grasshoppers soon followed them after everyone had hatched. However unviable those two were, at least they showed that the grendels' diet was working right.

The next thing the grendels did? Being generally friendly, you'd think they would choose to play with plants or something. No, what happens instead is that half of them decide that beating the everloving crap out of the others was the most fun thing to do. The first hour of the run was filled with the sounds of noms being consumed and grendels being whacked. The slapping got to the point where I just said "Screw it" and altered the hit script to punish anyone who tried slapping another creature.

I know baby creatures are supposed to be curious, especially when they're running CFE edits, but it does not make sense that they'd decide to be sociopaths within the first few seconds of life. It's ridiculous.

After that, I decided that the grendels could make it through the night and left the game running and went to bed. When I got up in the morning, anything that could have gone extinct, did go extinct (excluding the grass and the Square Root). The only food sources left were the stuff that replenished itself (the pumperspikel seeds, the chili pepper pot, etc.). Since there was a dearth of food, the grendels were focused on trying to find it instead of breed - there were also no eggs to be had, although the general population was around Generation 2.

To rectify this, I injected a bunch of food sources that wouldn't go extinct (including one of the original Gardenia plants), plus the tubas. That fixed the lack of food sources, and got them breeding again. So I left for my morning classes. Nothing much had changed when I got back, leading to the current state of the run: 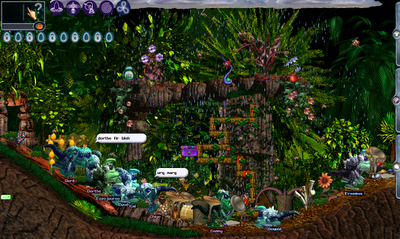 I'm probably going to tweak the grendels' genome a bit based on current experiences - for one, they shouldn't have decided to engage in beatdowns shortly after hatching, and I also plan on reducing their hunger a bit so that they eat what's necessary and leave everything else alone.

Ultimately though, I should have just went with a different metaroom. Gardenia is a bit on the small side, meaning that it was way too easily depleted. I'll probably leave this run go on for another few days, then restart it with the updated grendels in a larger area (though I have no idea what area at the moment).

On a positive note, the pests and weeds are doing their jobs.
Posted by D.L. Yomegami at 6:27 PM Leave a comment