When I last left Elise, she was sitting by the learning computer after just completing her words. Since I wanted to hatch another grendel soon and that she'd only distract the newcomer if she stayed, I decided to lead her elsewhere.

Past the greenhouse and herbs we went. I might have been content with leaving her in the garden, but I didn't want her playing with the bees. My original thought was to take her to the island, but there was a food patch at the foot of the Grendel Tree not far away.

A nice big patch of Muddy Swamp Carrots and Mushrooms would probably do it for Elise's food concerns. I brought down the ball from the upper levels of the Grendel Tree, and Elise was all set for now. I believe I've fixed the "Starch Glitch" present with Muppetboy's Carrot Variations, so that shouldn't be a problem.

After she was settled, I decided that it would probably be for the better if I got rid of the Bees and Hive Upgrade. I did so, in the process also removing the Shee Seed Launcher (the Beelacanth relies on the Upgrade for reproduction) and the Cloud Layer Butterfly (who relies on the Beelacanth).

After that was done, I opened up the Genetics Kit and got to work on the next inhabitant. 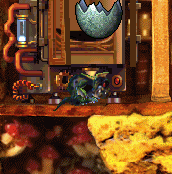 And soon enough, a little male came to life.

This is Mephiles...or rather, this was Mephiles, for reasons we'll get to in a moment. Besides his black pigmentation, he can get nutrients by being pushed or hit by other creatures. He also lacks the gene that normally makes creatures sleepy in dark areas (although C1 doesn't have a real concept of light and dark areas anyway).

Besides that, I also made a few changes to my base genome before making him. For one, I got rid of the Antioxidant-to-aging reaction. More importantly, I made it so that the brain and all its related receptors and emitters are unable to mutate. Hopefully, this will prevent crippling mutations from occurring further on down the line. That being said, Elise does not have these additional edits since I hatched her before making them, so some might sneak through. 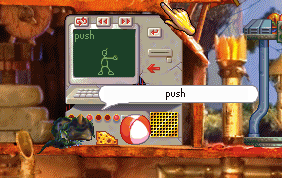 I did the same things for Mephiles that I did for Elise; I lead him up to the computer to teach him his words. For the most part, he was fairly agreeable, although he did sometimes move on to the next word before I could finish teaching him the previous word. Afterwards, I made sure he was fed and occupied, and then went to check on Elise.

I found her playing on the Desert Island. Unfortunately, almost as soon as the camera centered on her...the game crashed. When I reloaded it, Elise had gone back to the Muddy Carrot Patch, and Mephiles was never born. Thankfully, I didn't have to re-remove the Bees and Hive Upgrade and associated COBs.

Rather than attempting to re-hatch him, I decided to just play with Elise a little more. 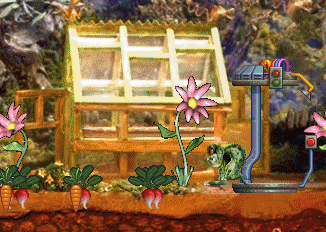 In the post-crash world, Elise decided to head back to the Incubator rather than moving forwards to the Desert Island. I'm not sure why; other than that she had a high need for pleasure.

She was there shortly, and stopped to mess with a piece of cheese (though unfortunately she wasn't in the mood to actually eat it). I brought the ball back down for her to play with since she was bored. However, I decided that the best way to keep that and Need for Pleasure low was to hatch another grendel.

Cue the second take at laying an egg. Rather than hatching it in the incubator this time, I moved it up to the Computer Area and used a COB to unpause the egg. It was now time to wait for it to hatch.

Will Mephiles ever get a proper shot at life? Find out in the next update! Which might actually come later today; that crash was really disappointing.
Posted by D.L. Yomegami at 12:21 PM Leave a comment