Before anything else, you might notice the blog looks a bit different. Thanks to some (read: a lot) of help from Jessica, I was able to add some HTML/CSS elements to this blog to make it look a bit nicer than it was at launch. The most noticeable changes are the transparency and the centered header image, in addition to the centered post titles. The background is also a little less grainy looking thanks to an artistic effect I applied to it in GIMP (and I still had to reduce the quality of it a bit - bloody 300kb limit).

Enough about the blog - it's time I told you about the first WR I'm documenting on this blog. This is a breed-testing run for the Waterfall Grendels V3. The world is called what it is to both note the room it's being held in plus its primary feature once I was done meddling with it. 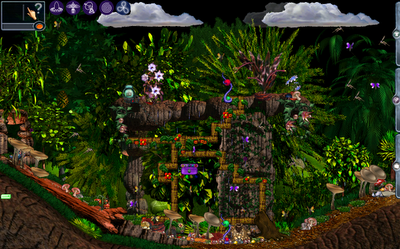 I ruminated on what metaroom to use for the run for a while before finally settling on Gardenia. I thought about the Biodome, but it's a bit buggy. I also considered Norngarden 1, but the lifts would need to be recoded a bit to fit grendels, there's a pond they could drown in (the baby Waterfall Grendels lack fully-functioning hydrophobia), and there was no real place to put the water. Gardenia (by zareb) fits the theme, is small enough to customize easily and rather quickly, and to top it all off there's a nice rock structure in the center to set up the waterfall. So, Gardenia it was.

However, the room needed some serious renovation before it was ready for customization. For one, its terrain by default is actually set to "Outdoor Concrete." If I wanted to use the default Gardenia life, I could have left it that way, but I didn't. So I had to change a bunch of room types. Now, the room is mostly Normal Soil, with the fallen tree over on the left being Boggy Soil and the top of the rocks remaining as Outdoor Concrete.

While I was at it, I changed the room's otherwise sloppily implemented CA system. Now, the light and heat change depending on the time of day, and there's a waterspout (invisible agent that spits out other invisible agents that produce water and nutrient CAs) in the room's center. I also tweaked the weather system a little bit (although it was mostly fine as it was). I plan on fully revamping the room's coding at a later date, but for now it's suitable for a Wolfling Run.

The list of agents that I used, organized by general, injected with the Agent Injector, and injected via the CAOs Tool:


General
Agent Injector Agents:
CAOs Tool-injected Agents:
The Evo Avo by Vampess was in here at one point, but it's apparently gone extinct.

Now, you're probably wondering about the Radio Box attached to the Egg Finder. That's part of the world's (Creature) Egg Management system.

This is the rest of the system. This setup of gadgets, called the Ovicidal Agent, was initially created by Minisauron to monitor the population of his Grendels of Minimordor. The idea behind it is to have older eggs constantly destroyed, so that only the best breeders get to pass on their genes. It definitely works for that purpose, but the main reason it's implemented in this run is to keep the generations moving. If it wasn't in place, then eggs containing gen 2 grendels would be hatching when the general population was somewhere around 7. This setup, by constantly destroying older eggs, ensures that the contents of the eggs are at a similar generation to the living population.

For those of you interested in setting up one of these, I'll detail the process in a later post. Their creation is beyond the scope of this one.

Now, to introduce the grendels themselves. 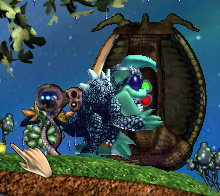 The original Waterfall Grendels are one of my personal favorites of the breeds I've made. As their name suggests, they're based on organisms that would normally be found living around a waterfall. To this end, the Waterfall Grendels enjoy cool, moist areas - hot, dry areas reduce their immunity, while cool, moist areas increase it. They also live a bit longer than most grendels (and most norns - their lifespan is comparable to the Bondi Norns). They can also hold their breath for a long time (about 5 minutes).

To be honest, I don't think the creation of the Waterfall Grendels V2 was necessary. However, I felt compelled to make them when I updated the agents included with the originals (the aforementioned Waterfall and Waterfall Mushroom). Their differences from V1 were mainly the fact that they were amphibious, scared of norns, and were more susceptible to being slapped to death. Due to the fact that I perceived them as unnecessary, I never truly liked them - to the point where I included the V1 grendels in the download.

V3 is an effort I'm very happy with (the male up there is an example of a V3 grendel). In most aspects, they're closer to V1 than to V2. In terms of features exclusive to them, the only major thing that differentiate V3 from V1 is that V3 can't last quite so long underwater, and will get scared if they start drowning (in an attempt to get them out of the water when that happens).

However, the base used for V3 is what sets them apart from the previous two. In addition to having all of the non-ForF edits of the CFE, they also have the digestive process ripped from Darcie's Gizmo Norns. That is, they can't last forever without food. An unaltered C3 grendel will last for an hour or more after hatching if left unfed. The Waterfall Grendels V3, along with all the other breeds that will share their base, last for a mere 11 minutes from hatching if they don't eat something. Given that they won't become adult for a little over an hour, they need to eat in order to breed (this does wreck their chances at the standard IQ test, though).

I'll end this post with a little bit of a cliffhanger:

These are the eggs of the initial population. The population limit is set to 10, as that's how many I think Gardenia can support at once. I'll also say that I'm not documenting the lives of the individual grendels. I'll probably leave the run going when I'm not actively playing the game (or even at the computer), and post updates here about the trends of the general population.