My Creatures drive is in an odd position right now. On one hand, I really want to get back to the game. On the other hand, every time I attempt to start up C3/DS I run into a roadblock that prevents me from getting far, mostly the fact that I can't decide what metarooms, agents, and breeds to use.

So how did I come up with a solution to this? Well, note that I said "C3/DS," not "Creatures in general."

Instead of attempting to play C3/DS and getting stymied by my own pickiness, I decided to go with Creatures 1. Despite the fact that C1 creatures are nowhere near as self-sufficient as C3/DS creatures are, C1 has the advantage of being much, much simpler. For one, I don't have to worry about what COBs have what behaviors. Coupled with the fact that there's more natural-feeling COBs for C1 than there are such agents for C3/DS, there's enough COBs for me to use comfortably without feeling I don't have enough. Secondly, genetics are easier to work with and not nearly as time-consuming. This is good, as genetics tie pretty heavily into my plans for this world.

You see, I decided to take a page from Keeley's blog, Creatures Great and Small (which is a great blog by the way. Although it's been years since the last update, what's there is incredibly interesting). The first generation of this world will each have some special genetic tweaks to make them more unique (and hopefully have some interesting babies when they get to breeding).

I'm also going to do my best to document this world, despite my horrible track record with such worlds (look at how long ago the last Tevaela update was). It's an odd situation for me; I find it does kinda sap my enjoyment when I have to constantly pause and take pictures for the blog, but at the same time I love the archive that results and people's reactions to it. Don't be surprised if updates about this world eventually stop happening, but until then I'm going to try to update at least once a week.

So, how did my first couple minutes go? 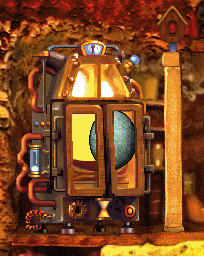 After creating my base genome for the creatures in the world (which didn't take long; all I had to do was tweak some instincts and stimuli), I had the Genetics Kit lay the first egg. Into the incubator it went, and the incubator hummed to life.

Seconds later, the hatching was complete... 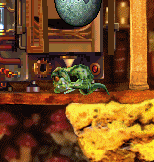 ...And out popped a little baby grendel. What, were you expecting norns? Personally, in C1 I find grendels to be much more fun to raise.

Anyway, this little girl is Elise. Apart from her white pigment, she is completely unaltered from my base grendel genome. Don't worry; everyone else will be a little more interesting genetics-wise.

Before going on, let me explain a few things about my base grendel genome. It's based on Slink's Many Colored Grendel's genome; this means that they have all the edits from the Life Kit Norns, such as the Fight or Flight genes. More importantly for this world, it means that they can breed. As previously mentioned, my only changes to this genome were a couple of stimulus and instinct changes. Grendels of this genome should be a little less grumpy and more sociable than normal (though they'll still get rather annoyed if someone slaps them). As well, I altered some instincts (mostly concerning food) to reflect the more efficient (in theory) instincts of the Wood Norns, which hopefully means that they'll eat better.

After some coaxing with the ball, I got Elise into the elevator and up to the learning computer, where I started teaching her all the words she would need.

It didn't take particularly long for her to learn everything despite the ball constantly distracting her. In fact, this picture was taken after she had learned every word in the computer. She proved to have a good start as far as eating went, as well. Of the two pieces of food in the picture, she ate them both before I could completely teach her the word!

While playing with her, I realized that maybe injecting the Bees and Hive Upgrade may not have been such a good idea. Since the bees fly past the incubator area, they caught her attention and naturally she tried playing with them to less-than-happy results. I do like playing with the COB since it adds more flavor to the world (and is vital for the Beelacanth plant to complete its lifecycle), but I do wish the bees weren't so attractive. I guess we'll see what happens as things move on.

And that's all for this update. Tune in next update for more of Elise's adventures and the next baby grendel!
Posted by D.L. Yomegami at 12:37 AM 2 comments