So in my last post, I finished up and released the Metallophagus Grendels V2. Unlike the Waterfall Grendels, the Metallophagus Grendels didn't get a wolfling run. Part of that was because the grendels themselves were working perfectly fine while I was running around coding their agents. However, I also wanted to run a feral run featuring the breed. In my time testing them, they quickly earned their place as one of my favorites (which is a big improvement over the quickly made breed V1 was).

So after three posts of nothing but releases, I resume my regular posting with details of my Metallophagus Grendel feral run, Ark World (a pun on "Arc Words" - yes, I hang around TVTropes too much). This initial post just contains details of how I set up the world. Later posts will be about the grendels themselves.

This is a single-metaroom run, but as opposed to using Annex's Hub (a great place for the Metallophagus Grendels if you're making a general purpose world), this coder went with something completely different: 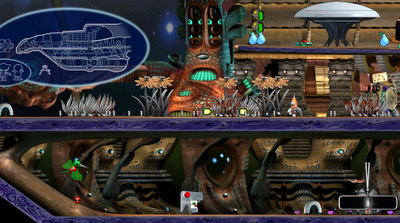 I went with the Bridge + Engineering from Creatures 3 - okay, maybe this place isn't that much different from Annex's Hub. It's certainly a lot larger, though.

Why did I explicitly refer to myself as a coder? Because this isn't a docked world. I went right ahead and just made a .cos file that injected only the Bridge, Engineering, and the Corridor connecting them (as well as a few agents, namely scenery and the airlock).

The bridge is where the grendels will hatch. By the picture, you can see that there's a bunch of Techno-Organic Carrot patches (which grew up on their own - techno-organic carrot patches tend to separate if left alone. And no, that rhyming was not intentional). There's also the solar flower from the Gaius pack, edited to match the grendels' genomes (Gaius uses the "deactivate" stimulus to get nutrition from gadgets. The Metallophagus Grendels use the "I've eaten something (general)" stimulus instead). You can also see a Whirly, whose code was left untouched. 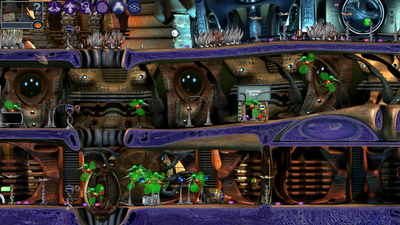 Here we have a better shot of the bridge's underbelly, including a whole  bunch of whirlies, the airlock, and the potion vendor.

The potion vendor is mostly there for flavor - as usual, no bacteria get injected when I make a new world, rendering its main purpose moot. It and the cheese machines have been edited to not require bionenergy (since this is DS where the stuff doesn't exist).

The corridor is more or less there to provide passage between the bridge and engineering. Those "doors" aren't actually doors, but fancy CA emitters. Like I said, this isn't a docked world - the doors would crash the game if used if they were real. The only other thing to note is the radio from the Portal pack - it's not the only thing from that pack that was injected, nor is it the only radio on the ship. Now that I think of it, I have an idea for a sound change....

Engineering has gone under a complete revamp. The creator, replicator, and gene splicer are no longer here. In their stead are the quasimechanical plants from the Gaius pack, making the entire area look like a jungle. It's pretty awesome, I say.

I end this first look into the world with the grendel hatching area:

Instead of an Ovicidal Agent (which could easily get taken apart by hungry grendels), I decided to use Balor's Eggonicer. Actually getting it to work was a pain - it won't handle grendel or ettin eggs if you inject it into a standalone world - but I have to say that I like how it injects one egg at a time. Helps avoid the psychopathy that plagued Gardenia Falls. As you can see, it's already at work - however, I forgot to note an exact genome for the eggs (by default, the .cos file I use to inject them just uses random genomes beginning with "gren") and as a result got a bunch of "normal" (I wouldn't call a GoM an example of a "normal" grendel) grendels. They're all getting exported once they're done hatching, and will probably be destined to wind up a part of my next splicing spree.

The Portal Cake and Spook's Ploopa Vendor both provide food for the young grendels. The cake won't last long, but the Ploopa Vendor will definitely have a use. I was going to use the vendor sprite for "gadget fountains" that spit out lightmodules and lightboxes (two otherwise useless gadgets), but the sprite is apparently buggy if you try opening it in SpriteBuilder or GIMP with the Creatures Image plugins.

Setting up this world made me realize that there's a dearth of general gadget agents. If nothing else, some more variety with the mechanical plants would have been nice. Another potential project for another time, I guess.
Posted by D.L. Yomegami at 3:41 PM 1 comment