Elise didn't take long to awake from her nap. As soon as she did, I lead her back down to Mephiles and tried this whole thing over again. Once again, the two seemed rather reluctant to socialize - this time around, Mephiles decided he wanted to be the antisocial one. 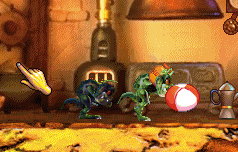 Eventually, however, I brought down the ball from the computer area, and for the first time they had a common interest to focus on. For a while, they were content to stick together and play with the ball. It was rather cute to watch, and I was happy that they could agree on something.

After a while of this, I decided to take away the ball again. Elise's response?

Yep, she decided to run away again. This time after Mephiles kissed her quite a few times. He clearly wanted to go somewhere with this, but unfortunately she had other ideas.

It's probably worth noting that they're both children at this point. Whether they got there naturally or because they got aged up a little by excess stress is beyond me. 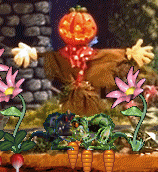 Once she woke up, they finally managed to get together for longer than a few minutes before one or the other ran off. Mephiles tried kissing Elise again. Her response this time was...to slap him a few times. This girl really didn't want anything to do with him, even if he was the only other grendel in the world. 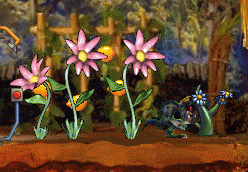 They separated again a little while after this when Mephiles got distracted by the Baobab. I decided to teach him the word for "weed" since he was looking at it, but I didn't manage to intervene before he decided to take a bite out of it. Great going, Mephiles. Great going.

Then I noticed the teleporter nearby and decided to warp Mephiles to the computer room so he could work off the effects of the Baobab while perhaps getting a nap.

Success was made. He quietly lay there for a couple minutes, and then took a nap himself.

While he was sleeping, I took Elise on a trip to the temple, teaching her the words for "weed," "herb," and "bigtoy" in the process. Unfortunately, the flibbertygibbit didn't do a whole lot to reduce the ever-present NFP.

Then Mephiles woke up. This time, I decided to warp Elise up to the computer area instead of bringing Mephiles back down. That way, they wouldn't be able to go far if one of them tried retreating from the other. 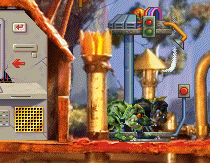 The result...was one big slapfest. I'm guessing the small area aggravated their fight-or-flight genes something fierce, and the only thing around to hit was each other. Even with the violence, however, I heard a few kisses, and for once Elise decided to wear a different expression other than that perpetual frown. 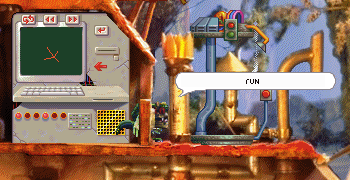 The whole affair must have been something good, in fact, because after a while of it Mephiles flashed a big grin at the camera. Elise was still playing hard to get, if her exclamation of "run" was anything to go by, but at this point I don't think either of them cared. In fact, the slapping was probably good for Mephiles in the long run - rather than getting fed up like Elise (and other grendels from my base genome), he gets food from being slapped. It still hurts, but it's also good for him in the long run, and as you can see he probably appreciated it.

Eventually, I decided enough was enough and used the teleporter to get them both down to an area where they had more space. 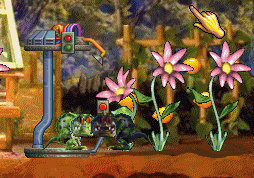 Frickin' finally. Next update will see if this relationship lasts, and perhaps a new grendel will join in the fun....
Posted by D.L. Yomegami at 7:26 PM Leave a comment