We are the Heart of Darkness....

Three release posts in a row - I seem to be on a roll here.

Anyway, I found that it has been a long while since I've made a properly new norn breed (the ice dragons were the latest norns I released, but those were made when the Gameware Forums were still up, which should tell you how old they really are). So, this latest release of mine shall remedy that: 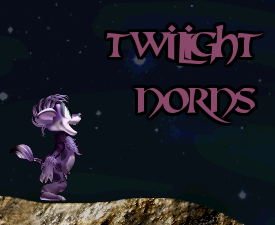 These norns have nothing to do with the vampire romance series of questionable quality, so don't worry about that. :P
The Twilight Norns are a night-themed breed - they are resistant to cold, take less naps than normal norns, and can play with beasts, pests, and weeds with no impact on their well-being.
They're also loners, so watch them around your normal norns...they don't react well to crowds.

For those of you wondering about Ark World, it's been called off - it was on my old computer, and I really don't feel like restarting it on my new one. To make up for that, I might detail my plans for my scenario world (which I'll start once the Garden Box gets publicly released).
Posted by D.L. Yomegami at 2:33 PM Leave a comment