Ark World: First Thing We Do, Let's Eat All the Food and Make Lots of Babies!

While this update was actually played out yesterday, I couldn't upload it since my internet whacked out (and today I had to take a bunch of finals...college life, yay). Also, fail Shakespeare reference is fail.

Ark World has certainly gotten a lot more hectic since the last update. 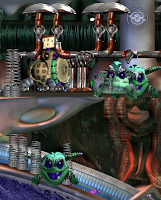 This segment of gameplay started off with another pregnancy. As you can see, most of the grendels who were running around downstairs in Engineering have migrated to the upper floors. Which means even more babies on the way.

Speaking of which, the pregnancy resulted in a little female. Unfortunately, you really can't see her well since the firstborn is obscuring her face a bit, but she features quite a bit in the other pictures.

At some point, the female on the lower floors finally joined the other two on the topmost floor of Engineering. Also, there was another pregnancy shortly before this picture was taken - I'm guessing it was the two on the right, but I don't quite remember.

As food has become increasingly scarce, the adult grendels have started to get around. Here, who I believe is the oldest grendel on the ship has joined up with the younglings on the upper floor. Also, the baby female gets a better shot taken of her (although she's still partially obscuring her face here).

The firstborn male eventually got crowded enough to go skydiving. While it probably wasn't too pleasant at first, his outgoing nature lead him to some delicious solar flower seeds. Also, I'm pretty sure the Mechanical Grendel's being on the ground floor was also his doing (it's normally sitting by the Egg Receptacle).

The mechanical garden gains another occupant when the little female follows her fellow youngster off the edge of the ledge (more unintentional rhyming, yay!).

This is about where I lost track of the pregnancies. The greenish male on the right is the newcomer - I'm not too certain who the parents are. 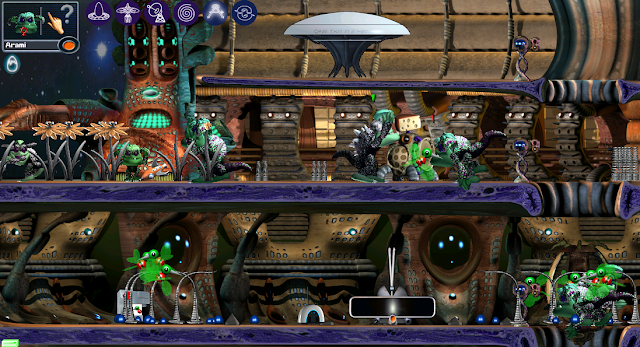 At this point in the run, the most popular place on the ship has become the Bridge. All the grendels seem to be cramping each other's styles, though. It was also about this time that I realized the grendels were running out of food - that female on the lower right was suffering from Eat Elevator Syndrome when this picture was taken (I really hate that bug). 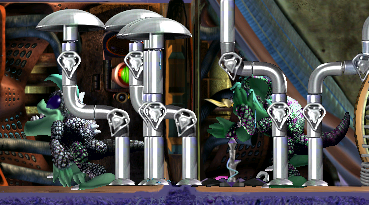 Of course, not all the grendels favored the bridge. These two decided to retreat back to the bowels of Engineering. Since there's both genders of grendel down there (and the population is rapidly increasing as it is), I'm not too worried about either one not getting the chance to pass their genes along. 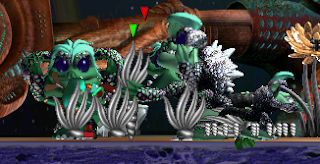 As the Gaius Plants and Botanoid inched ever closer to extinction, I decided that the time was now to reintroduce the Techno-Organic Carrot (updated so that it's not quite so prolific) to Ark World. Right away, the new patch attracted interest.

Right away, the patch drew hungry grendels in from far and wide. It seemed like the food issues had been resolved....

...Only for the grendels to completely wipe out the patch shortly afterwards.
I injected the carrot again, only to have all the seeds get nommed before they could sprout. Several attempts later, and I got patches established in their original growing place, the center of the corridor, and on several levels of Engineering.

Yet another baby male was born during all the carrot madness. Since I don't use a .cos file that disables season-dependent gender ratios, I figure that it must be a season that favors male birth. Either that, or the Grendels are channeling the spirit of Minimordor. One of the two.


Now that the carrot's been re-established, I expect the population to quiet down as they return to constant carrot grazing. At least the time when the carrot was not in the world managed to shake things up a bit.

In case you're wondering, I still haven't gotten around to patching the Metallophagus's .agent file with the updated carrot just yet. I'll make a post here when I get around to it.
Posted by D.L. Yomegami at 9:17 PM Leave a comment