Another Year, Another Birthday

As the title says - today is my 21st birthday. That means I'm finally free of the last bit of legal prohibitions - I can now drink alcohol, etc. Does that mean I will drink alcohol, etc.? No (alcohol has more cons than pros as far as I'm concerned).

I wasn't going to miss the chance to release a breed this year, if the crapton of releases that came before this one are any indication. I could have made a jab at my newfound ability to drink by making a breed revolving around alcohol, but decided that a serious breed would be more worthwhile. Unfortunately, this is where I break the streak of aquatic releases. Instead, this breed is more suited for an ocean of a different sort - the sea of outer space, as a passenger aboard of the Capillata. 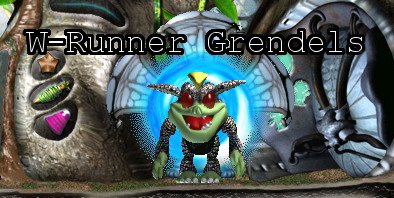 Corny metaphor aside, the W-Runner Grendels are simultaneously a breed designed for wolfling runs and a breed designed for Docking Station. They have the advantage of being able to follow smells and navigate doors and lifts from birth, unlike normal creatures who have to wait until childhood. In addition, they do not get homesick and love using portals. They're more even-tempered than normal grendels to prevent their anger from getting in the way of their survival, but if you think they're completely friendly you're sadly mistaken.

And speaking of portals, you may be wondering how there's an open warp portal behind the grendel up there when the DS server has been offline for who-knows-how-long. Here's your answer.... 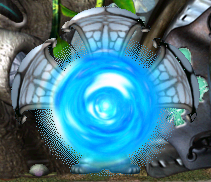 These altered warp portals let your creatures travel from place-to-place in your world, while simulating the appearance and feel of the warp jumps of lore.
Do note that there's a bug with these: if you have a closed portal in the same world with open portals, your creatures will sometimes get warped to the closed portal. It doesn't happen often, though, so hopefully you can live with it until I can figure out just exactly what's causing it.

To end this post on another corny philosophical note: the way these grendels jump through the warp they love so much symbolizes my anticipation and worries for the future. With any luck, I'll still be here next year, bringing you yet another breed to enjoy. Time will tell, though....
Posted by D.L. Yomegami at 7:45 PM